This page will feature my car photos. The cars are owned by others, so you may not use them commercially. But, you may share, if so inclined. 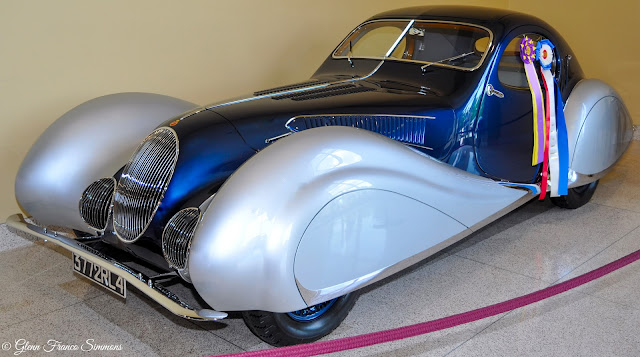 An awesome car: a 1937 Talbot Lago, T150-C-SS sports coupe on display at The Nethercutt Collection in Sylmar, Calif. It was manufactured by Automobiles Talbot-Darracq of Paris, France. The coachbuilder was Figoni & Falaschi of Paris.

"During its era, the teardrop, also known as the ‘Goutte d’Eau’, was one of the select few automobiles that both redefined automotive style and won top-level races," according to Supercars.net. "Having successfully combined racing function and elegant form, the Teardrop became trend setting and motivated many other French manufacturers to consider more streamlined design.

"While all of the French coach builders contributed to the styling ‘renaissance’ of the thirties, none did so quite much as Italian-born Giuseppe Figoni. He teamed with businessman Ovidio Falaschi to create one of the most prolific and successful French design companies: Figoni et Falaschi.

"The Teardrop was Figoni et Falaschi’s most coveted work," Supercars noted in its article. "It was, in a sense, a revolt against the more functional cars from the twenties. Here was a design devoid of any straight lines, one decorated with sensual curves which advertised speed without even moving. This style was emphasized by the diminishing pontoon fenders, called ‘enveloppantes’ by Figoni, and a converging rear end that could be called a fastback."

The 1906 Model M's coachwork shape is why it was named the Tulip Tourer. These horseless carriages shared a single-cylinder 98.2-inch engine rated from 6.5 to around 9 hp depending on model.

“1906 was Cadillac's biggest year for the sales of single-cylinder cars to date,” Blackhawk said. “The company boasted that there were nearly 14,000 single-cylinder Cadillacs in use throughout the world.

“That year was also a milestone for Cadillac's corporate identity as the flowing Cadillac script first appeared on the radiators of the automobiles.”

“But, the Leland-built single- cylinder engine produced more,” Blackhawk stated. “It was Cadillac's policy to deliberately underrate the engine output.”

Leland's creative genius was not limited to automobiles. He also invented electric barber clippers and the Leland-Detroit Monorail toy train.

Leland left Cadillac in 1917 and embarked upon building the Lincoln Motor Co.

Images on this site are reduced in quality to prevent the ability of thieves to reproduce my work on posters, canvas art, etc. As a result, they will not be as clear as are the commercial images I sell. Please visit my commercial sites, if you are interested in purchasing any of my art. Some of my commercial sites also do the same thing to my photos to prevent theft; that said, rest assured my photos are in focus. I use the best Nikon cameras and Nikkor lenses available.